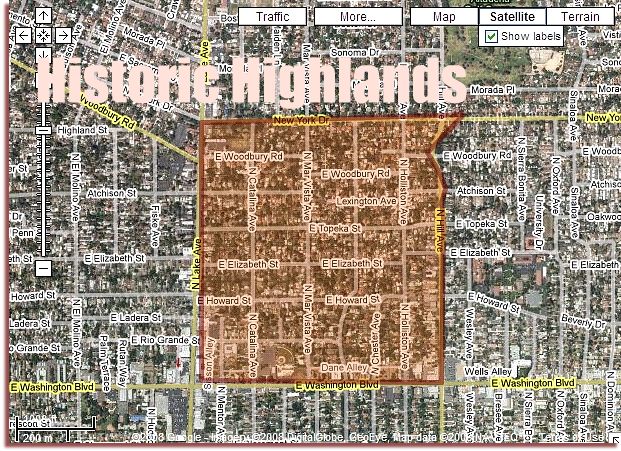 In late 2007, city of Pasadena has unanimously approved Historic Highlands as a Landmark Distirct. It's about time since this area has some of the most beautiful craftsman homes in Pasadena.

Ezra Dane crossed the plains from Massachusetts sometime between 1849 and 1852 and settled in Sonora County in Northern California where he became a prosperous farmer. Driven from the area by an out break of malaria in the early 1880's, he moved his family to Pasadena in 1883 where he purchased 160 acres in the San Pasqual Rancho area, known as "the place where every tree is pleasant to the sight and good for food" and began planting orchards.

In 1885, Dane and his wife Lois built their substantial ranch home from the first lumber brought to Pasadena by steam locomotive. From the house known for many years as "Sunnyridge on the Highlands", Dane oversaw orchard and livestock operations on his land, which stretched north from Washington to Woodbury Road and east from Holliston to a point midway between modern day Mar Vista and Catalina. He grew peaches, apricots, prunes and citrus, and raised some livestock - including about a hundred hogs - on Elizabeth Street. A driveway from Washington to his home was lined with a double row of palm trees still visible in the backyards of homes between Michigan and Chester.

As Pasadena grew north and east, homes were being built all around the ranch so the Danes began selling their land a parcel at a time. In 1912, they subdivided the land
immediately adjacent to the ranch house, creating building lots on Holliston, Chester, Michigan, Mar Vista, Denver (now Howard) and Rio Grande. The lots were sold to
members of Pasadena's prosperous business and professional class who had substantial homes custom built on the large lots during the ensuing decades. Ezra and Lois Dane
lived in the home until their deaths in the early 1920's. Their daughter Alice and later her grandson and his family lived in the home.

MacPherson owned much of the land bordered by New York Drive on the north and Washington Blvd. on the south, in what is now the western part of the neighborhood. The east/west streets were given names of the railroads: Atchison, Topeka, Santa Fe (now Elizabeth), Denver (now Howard), and Rio Grand. The names Catalina and MarVista acknowledge the great view of the ocean at that time. MacPherson built a home at 1075 Topeka in 1906 and was living at 1120 Atchison at the time of his death.

MacPherson teamed with famous entrepreneur Thaddeus Lowe to design and build the Echo Mountain Incline Railway which made its first official trip on July 4th, 1893.
Four million visitors enjoyed the breathtaking views and fresh mountain air for more than 40 years until the railway stopped operating in 1937.

READ MORE: Everything You Wanted to Know about Pasadena Neighborhoods 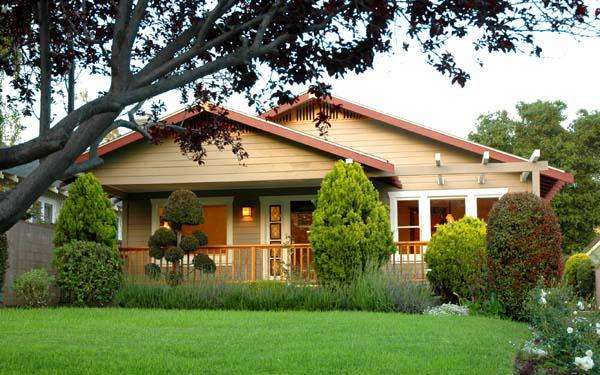 An example of a craftsman in Historic Highlands at 1506 Holliston above.

The earliest architectural style represented in Pasadena is Victorian, but Pasadena is mostly associated with the Craftsman style. Many significant local architects introduced Period and Revival style homes which were well received by cosmopolitan residents. The Prairie style might be attributed to emigrants from the Midwest. Indeed, the Prairie style home is quite at home next to the California Bungalow. Both share honest craftsmanship and find inspiration in the simplicity and beauty of nature. True to the craftsman ethic of using locally found materials, locally grown oak and Douglas fir are used throughout the homes in Historic Highlands, as well as art tile from Southern California's artisan community. River rock has commonly been used for foundations and chimneys, and likely came from the Arroyo Seco. Craftsman and Prairie homes were reactions to the industrialization and heavy, non-functional ornamentation of Victorians.

The architectural details in the homes of Historic Highlands find inspiration from all over the world. Influential local architects Greene & Greene were inspired by the Japonaiserie movement when they visited the World's Columbian Exhibition in Chicago in 1893. In the 1920's, American architecture was influenced by both European and early American architecture. Not necessarily faithful reproductions, Period revival homes liberally borrowed attractive or romanticized elements. The European flair of Period revival homes suggested the culture and prestige of its residents. Furthermore, in Southern California, Period revival movements represent a reaction against the dark organic interiors of the Craftsman style in favor of brightly lit and open rooms. Colonial revival reflects national pride and became popular following the country's 1876 Centennial. Similarly, the Mission revival style recognizes early California's cultural heritage and was popularized following the Panama-California Exposition in San Diego in 1915.

Today Historic Highlands is a combination of many different architectural styles and cultures.

The Historic Highlands Neighborhood straddles the borders of Pasadena and Altadena, situated between New York Blvd. on the North, Washington Blvd. on the South, Lake Ave. on the West, and Hill Ave. on the East.

Irina is a Top Realtor and the founder and President of Pasadena Views Real Estate Team™. She is available to assist you in all of your Real Estate transactions. Email or call her today at (626)629-8439.