How Will Shadow Inventory Affect Your Home Price?

A couple of weeks ago, federal government and Attorneys General in 50 states reached a settlement with major banks called the National Mortgage Settlement.  I’m sure you have read and seen from the newspapers and on tv about the current state of affairs in the real estate market and you have formed an opinion.   By the time, we’re finished with this article and you watch the videos below, I promise you that you will  have a better understanding of exactly how the distressed homes will affect the real estate market.

I've put together a webinar to take you through step by step what Shadow Inventory is, what the National Mortgage Settlement is and how it will affect our market. To make it easier for my readers, I'm breaking the webinar into 3 parts and providing a quick overview below.

What is Shadow Inventory?

Let's start out with the definition of Shadow Inventory. It breaks down into 3 components:

Each and every state has "Shadow Inventory".  California's volume is not as great as other states because the banks have been clearing through the existing inventory faster than in other places around the country.

Different states have different ways to foreclose.  California is considered a non-judicial state meaning that the banks do not have to take the foreclosure through the courts and usually the process is pretty fast.

However, because of the Robo signing and the mess that occurred when the mortgage companies didn't really finish their paperwork right, the Attorneys General in all 50 states started to push back  on the banks and insist that the banks complete the paperwork correctly or they will be penalized.

So... between the foreclosure process and the actual foreclosure when the banks were able to take the property back, there was a line drawn by each local state saying that the banks could not take the house back before they finished filling out the paperwork correctly. 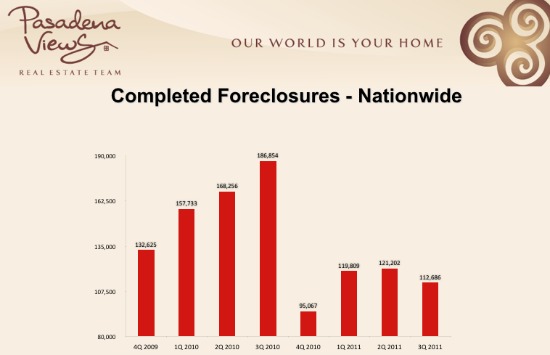 Let's take a look at the 4th quarter of 2009 to the 3rd quarter of 2010 above. What we can see is that in those quarters, and by the way these are not cumulative numbers, but are individual to each quarter, we can see that the number of houses that the banks were taking back, actually foreclosing on, were growing dramatically.

Then the robo signing scandal was announced - banks were not processing the paperwork right and were just signing off on it. That's when the Attorneys General stepped in and said that they were going to penalize banks for not foreclosing correctly.  So the banks simply stopped or slowed down the foreclosure process until they found out what they were allowed to do.

And, the impact it had on the number of completed foreclosures in this country is that they dropped like a rock in the 4th quarter of 2010. 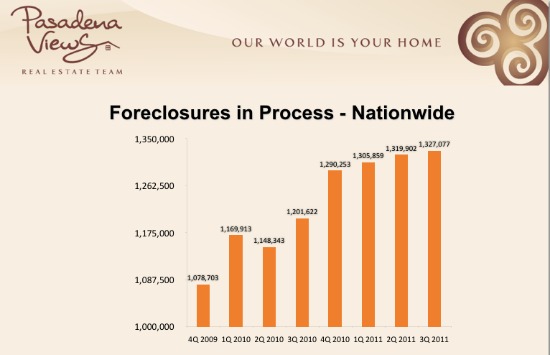 The foreclosures that are actually in process where the homeowners are behind 3 months or more on their payments are actually increasing steadily for the same time period.

And, that's what's causing the back log and is a huge component of the "Shadow Inventory" that you keep hearing about.  Tomorrow, I'll post Part 2 that will explain the National Mortgage Settlement and how it provides the banks with a road map in releasing all this inventory.

Irina Netchaev is a Top Realtor and the founder and President of Pasadena Views Real Estate Team™. She is available to assist you in all of your Real Estate transactions. Email or call her today at (626)629-8439.

LOOKING FOR A HOME?  SEARCH FOR HOMES HERE